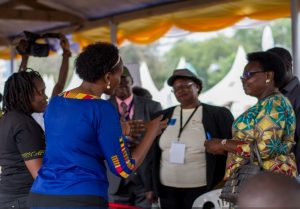 UFZA participated in the West Nile Business Expo in Arua City. The expo was organized by GIZ under the theme ‘Unlocking Business Opportunities for all’. The major objective of the expo was to take government services closer to the business community in West Nile and to create economic opportunities for the area.

Stakeholders from different sectors such as agro-processing (honey and fruit), meat producers, local government, and banking sectors were engaged on investment opportunities in Free Zones.

The District leadership indicated willingness to avail land to UFZA for development of a Public Free Zone in Arua City. UFZA was informed that the land had already been earmarked and processes were underway to formalize the offer. Arua City Speaker, Mr. Onduma Solaiman and the Ag. Chief Administrative Officer pledged to support the Authority in acquiring land which will be developed as a Free Port and as a gateway to the wider market in Democratic Republic of Congo.

Speaking at the event, Hon. Grace Kwiyucwiny, the state Minister for Northern Uganda, commended UFZA for the work done so far and urged the Authority to continue engaging different stakeholders to publicize the scheme in different parts of the country.