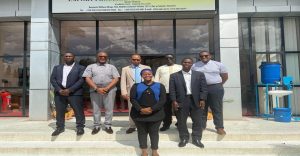 Uganda Free Zones Authority held a benchmarking visit to the Special Economic Zones (SEZs) and Export Processing Zones (EPZs) in Tanzania in July 2022, to share experiences and knowledge on the management and operations of both public and private SEZs and EPZs. The visit was also intended to identify best practices for inclusion as part of the ongoing process of amendment of the Free Zones Act, 2014 and related laws.

The Export Processing Zone Authority (EPZA) is an autonomous Government Agency operating under the Ministry of Investment, Industry and Trade. In 2011 EPZA’s responsibilities were expanded to enable EPZA to oversee the SEZs Program.

EPZA totally depends on Government budget for operations. The Tanzanian Government invested USD 29M (United States Dollars Twenty Nine Million) to setup the serviced facility at Mabibo/Ubungo where the EPZA is currently located. The Country has, to date, generated up to USD 2.6 billion in exports and attracted capital investment of up to USD 2.5 billion. Tanzania has created more Zones which include: Ubungo- 60 acres; Bagamoyo- 9800 hectares; Tanga – 1,363  acres; Mtwara- 2,600 Hectares; Lake Zone -1200 hectares; and Dodoma – 1500 acres among others.

The major challenge mentioned is funding for infrastructural development to create SEZs.

The regional counterparts are strengthening the Free Zones scheme in line with global trends of manufacturing and processing for export and trading for development in the age of global value chains. Uganda should follow suit to in order to compete more favorably.