Hon. Matia Kasaija, Minister of Finance, Planning and Economic Development, said taxes and other non-tax incentives are aimed at 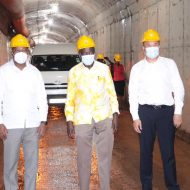 Hon. Matia Kasaija, Minister of Finance, Planning and Economic Development (Centre) with the ED, UFZA (L) and the General Manager of Wagagai Mining Uganda Limited (R) in Busia on 6th May 2022

supporting investors establish, after which, when their establishments are firm enough, can be taxed.

Speaking during a tour of Wagagai Mining Free Zone in Busia District, Hon. Kasaija said a number of people ignore the wider benefit of an investment to the economy and instead focus on the minor details of tax exemptions and incentives.

“The taxes can come later when the business has been established. What we are interested in is the money they bring in. We benefit in a number of ways,” he said, noting that government also uses incentives to win over investors, many of who are sometimes reluctant to invest in parts of Africa.