The project is part of the of US$620 million US investment which also comprises the expansive Uganda-China (Guangdong) free zone of International Industrial Cooperation situated in the area. The project is part of the of US$620 million US investment which also comprises the expansive Uganda-China (Guangdong) free zone of International Industrial Cooperation situated in the area.

The project with a phosphate fertilizer production plant, is introducing the first purely organic fertilisers on the local market and will be producing 50,000 tons at the start which will grow to 100,000 tons as the demand grows even beyond borders across the region.

Dongsong Energy Group, Uganda Limited, is also undertaking a number of other projects under the Uganda-China Free Zone of international industrial cooperation. These are steel production, glassmaking and producing iron slag powder, brick making and shear butter production, among others. 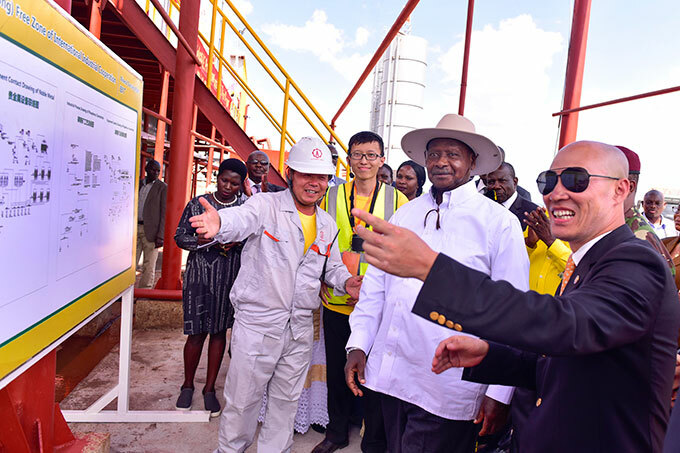 The industry is going to be the first in East Africa to carry out the full production from mining of minerals, separating them from ore dressing and processing them into final products.

President Museveni, who toured the phosphate fertilizer plant and other upcoming factories, was happy to note that once the factories are fully  operational, Uganda would no longer need to import fertilisers, glass, steel and iron and this would save the country lots of money.

“In 2013 Uganda was spending US$50 million on importing fertilisers from China but this will stop. We were spendin US$23 million on glass per year. All these imports will stop and instead we will be exporting to the region,” he said.

He said the reason why there was huge stagnancy and delay in establishing mineral factories in the region, was because the government and other private companies in Uganda did not have enough capital to invest and funds to compensate the people who were on the land.

“It was selected as Free Preferential Trade Area to produce minerals for COMESA but we did not have enough capital. So, the Chinese came and we explained to them and they accepted to invest,” he explained.

Mr Museveni hailed China for using a smart policy of encouraging both private and Chinese Government companies to invest in Africa’s viable projects that returned profits. He further commended the Chinese Government for not only supporting money projects but also infrastructural developments like the Isimba and Karuma hydro power projects. He reiterated that these would help supply cheap electricity to the many upcoming factories in Sukulu village.

He also noted thatUganda will become economically competitive but only if there is no corruption.

“There are flies that must be fumigated because they disturb our  investors by becoming parasites to them. We are going to lock them up. We shall wipe it (corruption) out as long as we get facts,” he warned.

The President thanked Dongsong investor for his dynamism and continued support in Uganda.

The Minister of Energy and Minerals, Hon. Irene Muloni, said the project will be a first scale mine in Uganda. She reported that Dongsong Company has a working license covering over 28 acres and a mining lease of 112 hectares.

She encouraged the people togive it national support because it is of national importance.

The President of Dongsong Company, Mr. Weidong, revealed that after the completion of the first phase of the project,1,400 people would be employed and that the second phase would have around 3000 workers.

He added that he was going to make a continuous effort to realizing his commitment to people of Uganda.

The Chinese Ambassador to Uganda, Mr. Zheng Zhuuang, noted that the Sukulu project is the biggest private investment in Uganda adding that it wouldbe able to employ about 3,000 people locally and bring in high tax revenue every year.

He thanked President Museveni for the support to the China- Uganda bilateral investments.